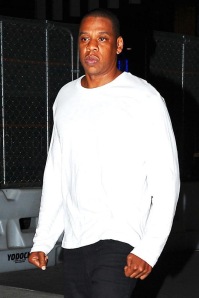 According to New York Daily News, Jay Z is reportedly being sued more than $18 million after Parlex Fragances, the company who created his scent Gold Jay Z, filed a lawsuit against him. The company filed the lawsuit against the rapper turned business mogul on Tuesday in the Manhattan Supreme Court, claiming the 46 – year – old failed to promote his own signature fragrance.

The New York Daily News, also reported the musician – whose real is Shawn Carter – was expected to make at least six promotional appearances including an appearance on Good Morning America, an in – store appearance at Macy’s and an exclusive interview with Women’s Wear Daily.

According to court documents, snow the fragance’s release in October 2013, Jay Z had made no appearances as such. The papers also revealed while he did not show much interest promoting the fragrance, he liked the design of the elegant designed bottle.  The company also pointed out, he also failed to do any social media posts about the product.

In the documents, Parlux Fragrances lawyer, Anthony Viola, stated the company worked with Jacob the Jeweler to create five prototype bottles which all had solid gold caps and on the exterior, costing a staggering $20,000 each.

He said: “Mr. Carter rejected all of them and kept the prototype.”

Parlex Fragance have revealed the perfume received great success at first but have alleged, Jay Z’s lack of support saw the interest in the product drop.

The company has also accused the rapper of not developing a follow up scent to keep fans interested. They are demanding the court make Jay Z pay back the $2 million up front royalty and give back the $300,000 shares, void their contract and at least $18 million in damages.